I just want to go here and explore, maybe write a little something about this piece of art. Friday. Credit to Lemanshots from WordPress.

I did write a little story about this digital picture of such a fine place. Let me know what you think. My attempts at short fiction 1500 words. Thank you all for your inspiration! 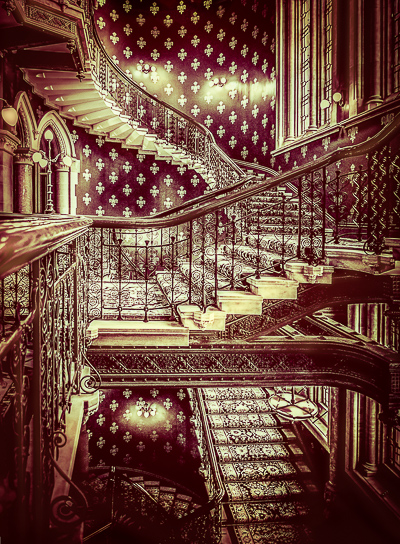 Piano notes could be heard on this late sultry evening in July of 1935 as the elderly couple sat on the burgundy-velvet love seat in the grand lobby of the Pancras Hotel . A gentleman artist was performing for a near non existent crowd. The wedding party of yesterday had partied and left, returning home to the countryside.

Apparently, Gracie and John Smith couldn’t depart as yet. Their grandson, Johnnie, was all that was left now as his sister was betrothed to her American sweetheart, would honeymoon in Paris, then move to the farm in the states. (Johnnie and his sister lost their parents back when he was one from an auto accident). Her groom was a farmer from the middle of America. It would be a long while, if ever, when they’d be reunited. Little Johnnie didn’t know of this, only that he received many hugs yesterday and he swore his sister had tears in her eyes. He decided that’s what happiness and “love” bring, lots of wet faces and sobs.

He, Johnnie, looked around the lonely lobby and wandered from sofa to sofa, scouring the place for some form of life. Brown eyes lofted to the staircase and back at his grandma and grandpa. They sat while minds floated to the music played by the piano man as they remembered one tune after another. The gentleman lobbyist or attendant from the front desk assured them the music would last two more hours maybe more.

“What should I do?” He whispered to himself as he sat dressed in a suit with bow-tie. He looked for other faces, but there were none, et all. He must find his adventure. He quietly walked up to his family. “I have to pee.”

John Smith smiled upon the boy and looked to the hallway behind the front desk. “Right over there, Johnnie. You can go by yourself.”

Johnnie smiled. His adventure would now begin. He looked back and saw his grandparents talking, laughing, and drinking as they nodded to the piano man. Johnnie sped up his movements on the first set of stairs to escape their view. He looked up. And up. He was going to find something. His hand smoothed over the wooden banister and it glided like a sailing ship he’d seen come into port two days ago. Grandma Gracie told him, “I believe it comes from special trees in the woods, very strong ones.” He wondered if he’d ever seen the trees in the woods before, that ended up as a wooden banister.

After this contemplation and feeling like he’d discovered gold while on board a big wooden ship, he then for no apparent reason whatsoever, skipped steps. Johnnie took large lunges stretching his inner groin muscles a bit much. He thought he heard his pants rip apart at the seams. He laughed and kept going up. He skipped a floor. Why not? The notes of tunes, classic in rendition, penetrated the opening but not as loud.

He put his hand over the gold fleur-de-lis patterns on the wall. He knew what they were, grandma told him, but he couldn’t remember what they symbolized. He calculated he’d made it to the 3rd floor. He decided to run the hallway very fast from one end to the other. Halfway down he hit the floor when a door opened and a woman came out, yelling, “I don’t ever want to see you again!”

Johnnie stopped. Startled and a bit scared he resumed the upright position.

She looked at him, sized him a good stare.

She was sad, or was it mad he questioned?

“What are you doing you little scoundrel?”

Johnnies eyebrows rose and then lowered. He replied, “Why nothing. Better yet, what’s the matter with you?”

“Nothing and everything,” she laughed.

“Johnnie, at your service madwoman.” He offered his hand and they shook to their new acquaintance.

“Pleased to meet you this fine evening.”

“Likewise.” She iterated. “I’ve got an hour to let off some steam before I return to slumber for the night. You?”

“There’s two things I’ve wanted to do here with another adventurer and have never been able to do it, least not since I was a kid.”

“Seven. Does it matter?” He answered cockily.

“Old enough, I suppose. Can you balance?” she asked.

He stepped on one foot, closed his eyes and held his arms out.

“Good. Do you scare easily?”

He squinted, looked at her, then thought of the serene but tedious scene in the lobby. “No way.”

“Ready for some action, then?”

Caren took off for the 4th floor rather quickly. She skipped steps, too. He liked her already.

Once at the top, she whispered in his ear what they were going to do and when finished they must hurriedly, so as not to get caught, exit back up to the 5th and 6th floors. She would show him the special rooms in the towers.

Boy was this his lucky night! Brown eyes followed her every word. She said, “First though the real fun begins.”

She climbed upon the banister made of special trees. He followed. The unlikely pair lay on their abdomens and flew down and around the curves. Smiles widened and light laughs followed down the passage way. Johnnie pretended he was flying, only backwards. She helped him to stay balanced. He got the giggles and couldn’t stop.

She laughed with him and tried to shush both of them. No one heard them as there was no one present to over hear the light excitement of new pals.

“Remember, the last banister you must ride on your back and bottom, being very careful to not fall off. You can do it. Then run right back up to the fourth floor and I’ll show you the special towers on five and six.”

Little Johnnie was so energized. He knew he couldn’t stop. He realized she waited to the last stairs for the funnest part of all. And a good thing as one would not want to fall four floors down. No way.

Right before he let go he heard the church choir from yesterday in the cathedral where the wedding took place. He was ready to let himself fly. Caren let him go first and he nearly fell off a good many times. The piano man looked up and smiled at them. Little Johnnie fell right at the end when he tried to dismount. He took a tumble and the piano man paused his keys; Gracie and John looked at him when he stopped at mid song.

Quickly, he recovered and banged hard on his ivory music box. He threw his hands in the air, stood, and bowed. Stunned, the couple clapped. He asked them what favorite tune they might like to hear next? All the while he let the adventurers escape to higher heights.

Caren and little Johnnie breathlessly flew back up while leaving giggles in ascension to the fifth floor. At the end of the fourth floor they found the passageway through a special door hidden by library books.

“Johnnie, this is my father’s hotel!”

“Seriously?” He smiled. His adventure was more than he could have dreamed. His sister was gone and now, tonight, he had a new play mate. He’d follow her anywhere.

Inside the tower, he took notice there were not any dragons, prisoners, or ghosts as one might suspect or be told. Just a bird on the ledge perched against the city backdrop when Caren opened the iron laden door. The pair walked out into the night with heavy fog surrounding the balcony and stood together: high up, safe, and exhilarated from earlier spent energy, acting foolish and daring.

“You’re not mad anymore,” he said.

“No, I’m not. You see if ever you become bored or mad, find something daring, fun and exciting to do. Go on a small adventure.”

He smiled. She didn’t tell him that her father was closing the hotel next week. She not dare ruin the moment as they looked out upon London in the fog above the Pancras hotel and railway.

Novelist, Nurse, Stylist and Mother from Atlanta. I created a store on Zazzle named Palmetto Stars w plans to open an estore of my own! My blogs are carolineclemens.com & theivorytide.com Where did I learn to write? Right here on WordPress. View all posts by Caroline Clemens

One thought on “Grand Staircase of St.Pancras Hotel, London.”